So, looking for the latest hair trends? If this year’s Golden Globe Awards were telling of anything, it’s that 2013 is definitely the year of the hair! This is the fun entree before the main course of the Oscars, you can get endless hair inspirations from 2013 Golden Globes for your next prom, party, event or wedding hairstyle. 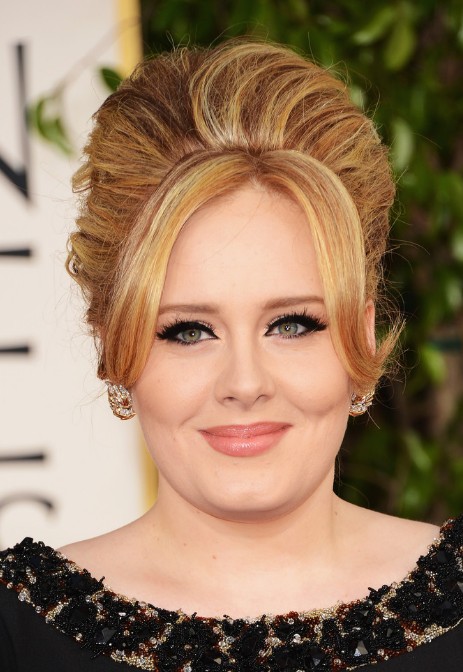 Adele stays true to her classic big hair, and the soft center parted bangs looked great on her. 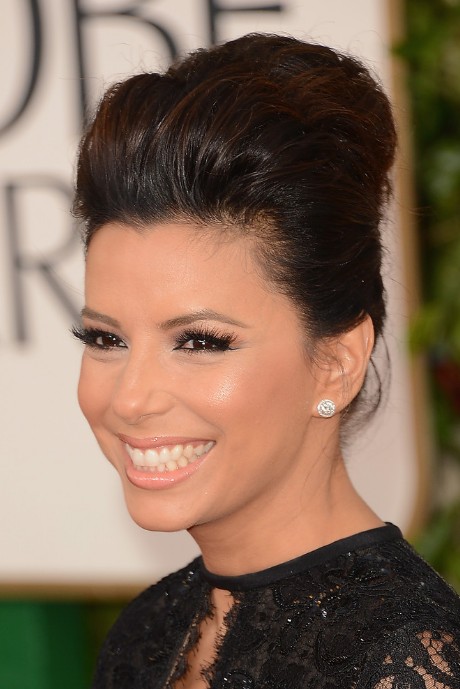 Eva Longoria goes for a high pompadour,  also known as the quiff or the “faux hawk.” This hairstyle — which usually features shaved sides and a puffy teased top that reminds me of a rooster’s comb. 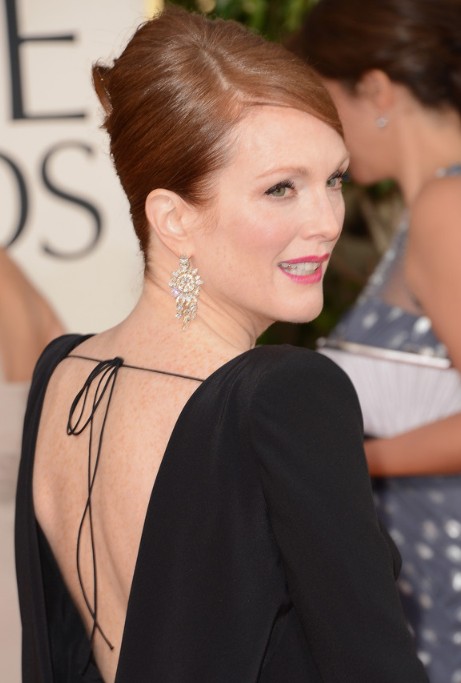 Here is a classic updo from Julianne Moore, her simple traditional beehive features a sleek side part. This retro version of the updo is sleek and sophisticated. It is the perfect accessory for an elegant prom dress or stunning wedding gown. The style shown here is the traditional smooth and sleek beehive. It is easiest to create with shoulder length hair that is all one length but also works in hair with a few layers. 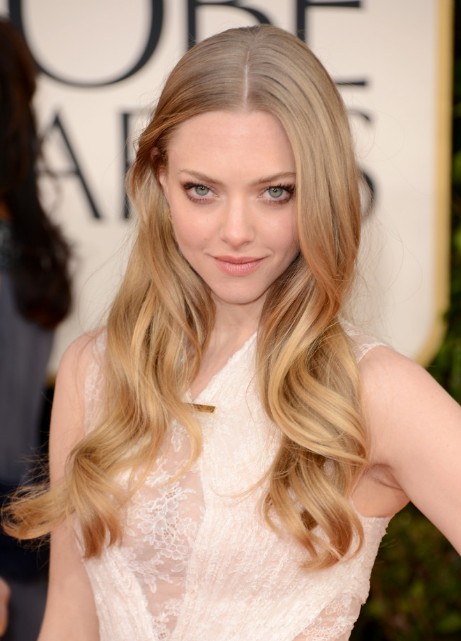 The center parted hairstyle made a modest appearance on the red carpet at the 2013 Golden Globes Awards. Meet our new hair crush—the amazing Amanda Seyfried! All this born-with-it beauty needed was a few bouncy curls, a sweep of mascara, and soft pink lips to steal the show. 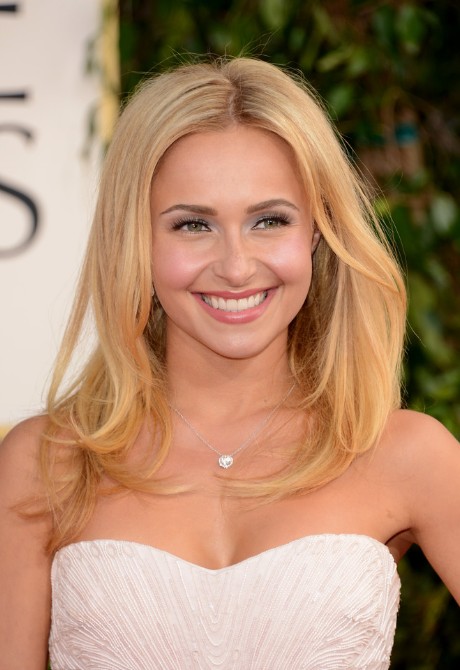 Sexy center parted long blonde soft wavy hairstyle from Hayden Panettiere. What a glow! The secret to cheeks that pop like Hayden? Dust peachy pink blush on the apples of your cheeks and sweep just a hint of highlighter along your cheekbones. 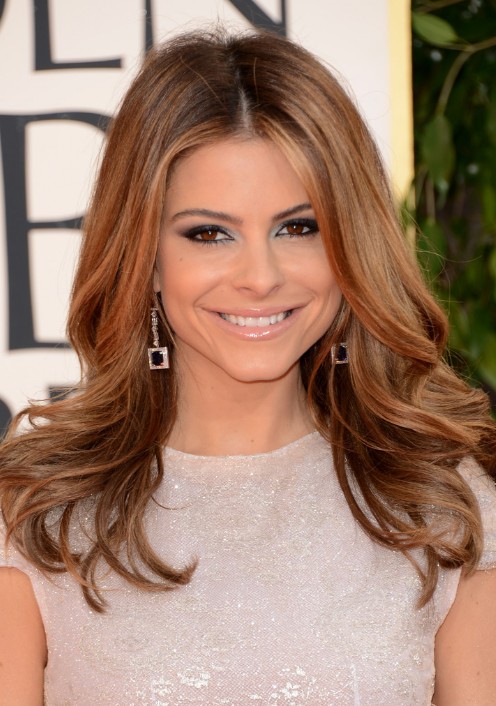 Beautiful long brown wavy hairstyle with center parting! Maria Menounos didn’t miss a beat with this gorgeous red carpet look. Flawless curls, glossy lips, and high-shine metallic eyes made her fit right in with the California landscape. Do you love this style?

Hairstyle trends seem to change, every year new trends take over and so we can change and upgrade our hairstyle to look trendy and hot. The center parted hairstyles are back this season! Here is Alyssa Milano’s latest new hairstyle, she also wore a sexy center parted long brown hair here. Heavy-handed liquid liner and a full set of falsies ensured all eyes were on Alyssa Milano’s, well, eyes. I love this look!

This is the classy 1920s short hair look complete with a formal arrangement of waves and a side parting. With the upcoming release of The Great Gatsby, 1920s inspired hairstyles are a huge hair trend. This classic hair style works in all hair lengths, no matter you wear long hair, short hair, or shoulder length hair, you can try the 20s’ inspired wavy hairstyles. 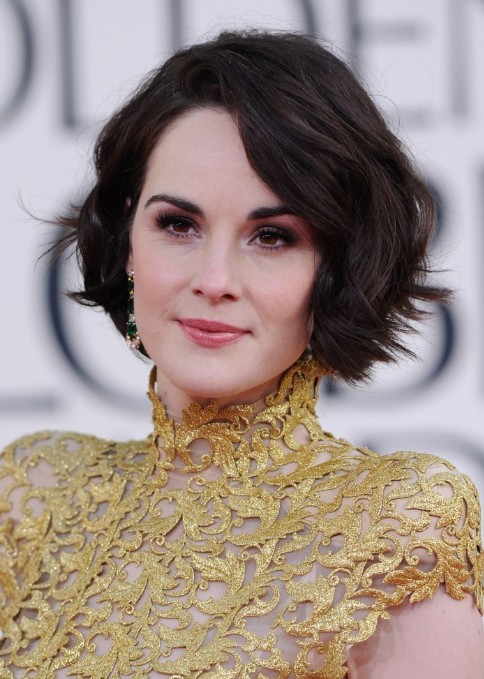 The short wavy bob hairstyle is very popular last year, and still hot in this year, if you are going to cut your long hair shorter, you can try this fabulous 1920s inspired chin length wavy bob cut! 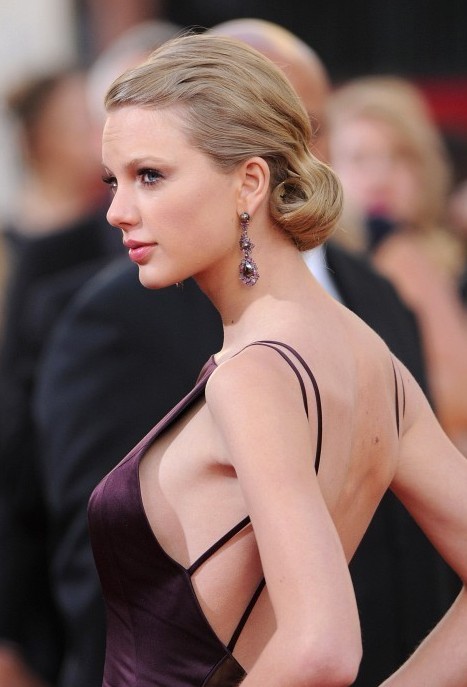 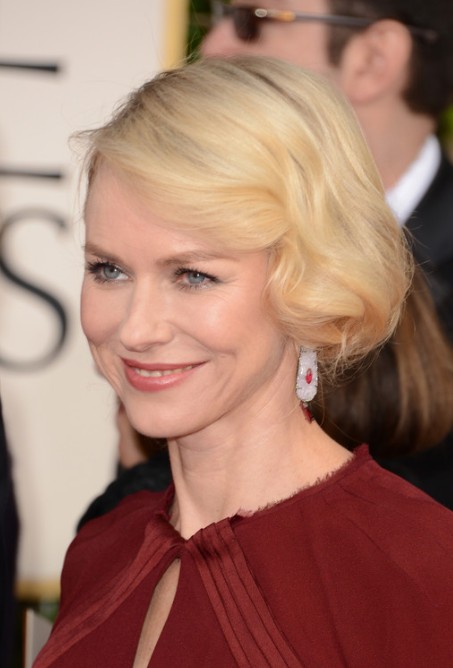 The braided hairstyles are hot in the latest year, and still hot in this year. 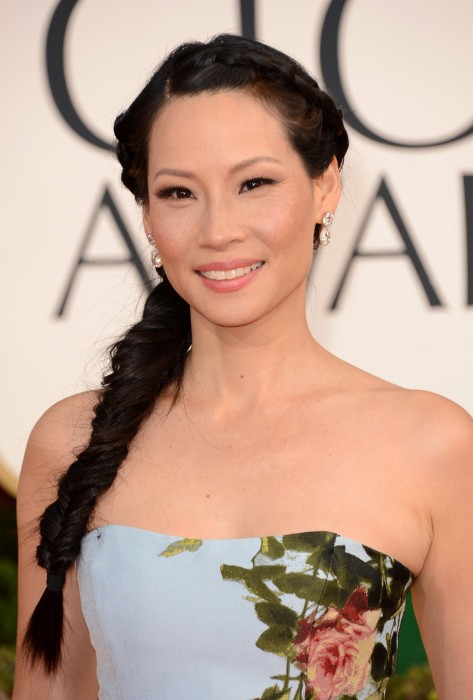 Latest popular braided hairstyles for women: the sexy messy tousled side fishtail braid. Not too overdone, yet not underdone, Lucy Liu’s tousled fishtail works for any occasion—day or night.

2013 Hairstyles Trends: The Side Swept Hairstyles

No matter you love to side sweep your hair to the left or right, it’s OK! And the side swept hairstyles is great for long hair and short hair, and will never out of fashion! You can see a lot celebrities wore side swept hairstyles at 2013 Golden Globe Awards. Stars love to side sweeping to the right: Heidi Klum, Megan Fox, Jennifer Lopez, Rachel Weisz, Isla Fisher. Stars love to sweeping to the left: Jessica Alba, Tina Fey, Nicole Ritchie, Kelly Osborne, Rosario Dawson, Rosie Huntington-Whiteley. 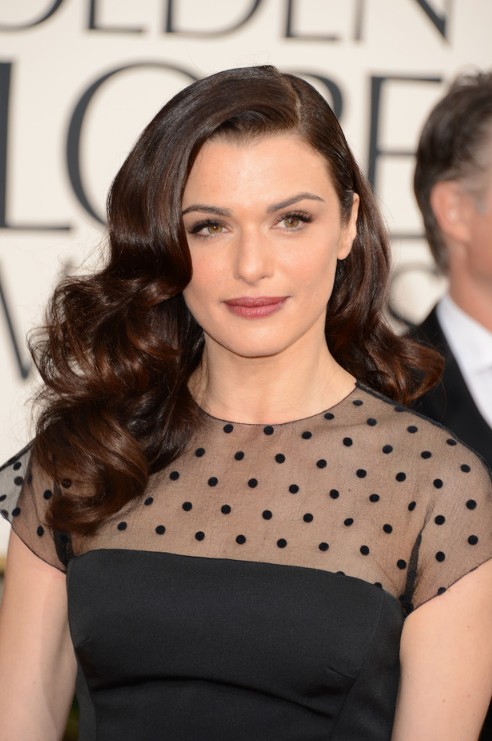 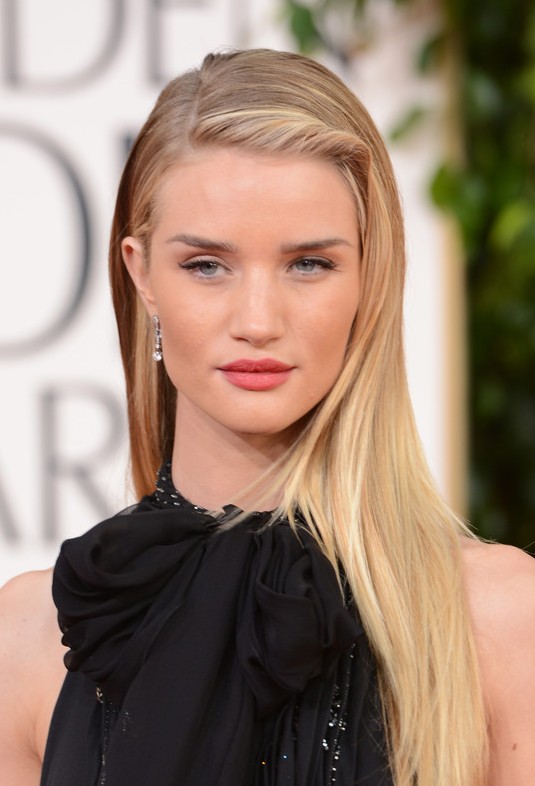 A lot girls love to wear long straight hairstyles, here is Model Rosie Huntington-Whiteley’s latest new deep side parted long blonde straight hairstyle. This look is simple and easy to create. To give the lovely Rosie Huntington-Whiteley’s Saint Laurent gown an extra dose of Parisian chic, celebrity hairstylist Cervando opted for a ‘do that was free-spirited and effortless. 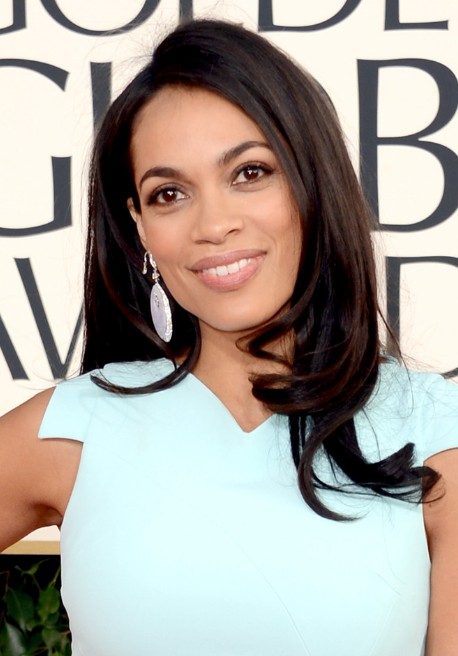 Love sexy relaxed curly wavy hairstyle? Rosario Dawson sported one of the season’s biggest trends—peplum!—in a sky-blue Antonio Berardi gown, so naturally she needed an equally modern ‘do to complement. 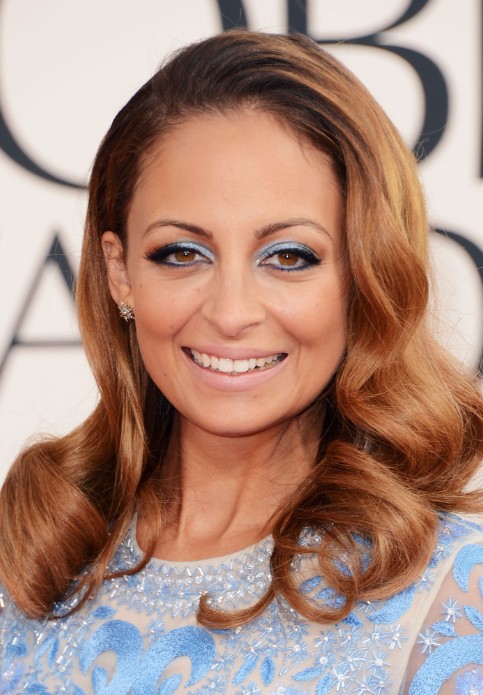 Holy smokes! This might just be the softest, shimmery-est, most mesmerizing smoky eye we’ve ever seen. Nicole Richie switched up the classic black smolder in favor of an icy blue hue that matched her gown. 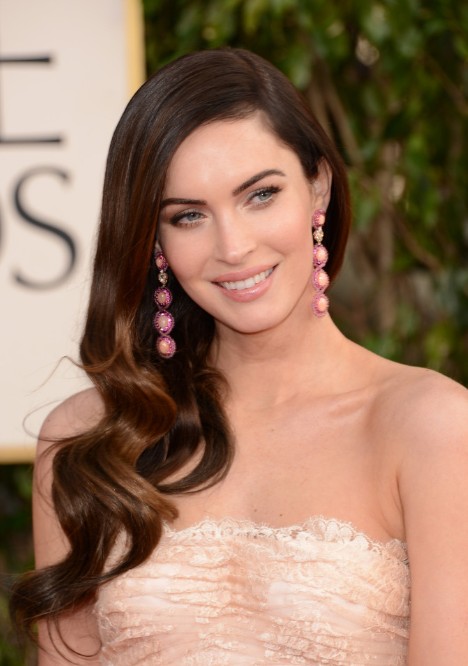 Megan Fox looked so beautiful with this sexy long wavy hairstyle. Her sleek, sharp side-parted waves are still strong, and that creamy metallic shadow is simply striking. Do you love this look? 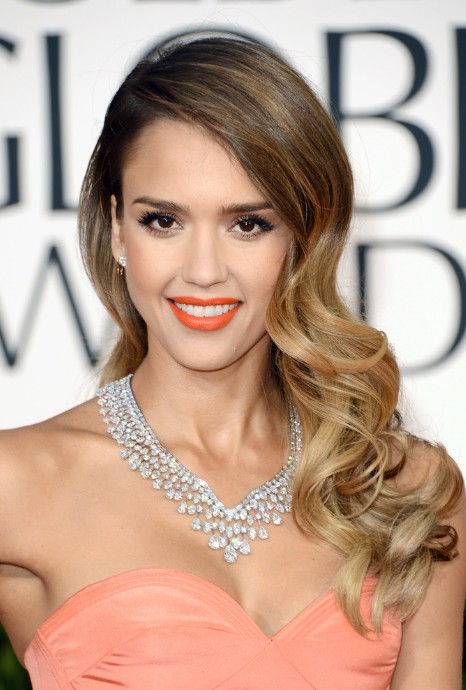 Jessica Alba latest new hairstyle: a sexy side parted long ombre wavy hairstyle. Jessica Alba doesn’t need much, or anything really, to look radiant—the girl’s a natural beauty!—but those orange-red lips and voluminous lashes didn’t hurt one single bit. A lot people asked me is the ombre hair still in in this year? Now, you may know the answer. 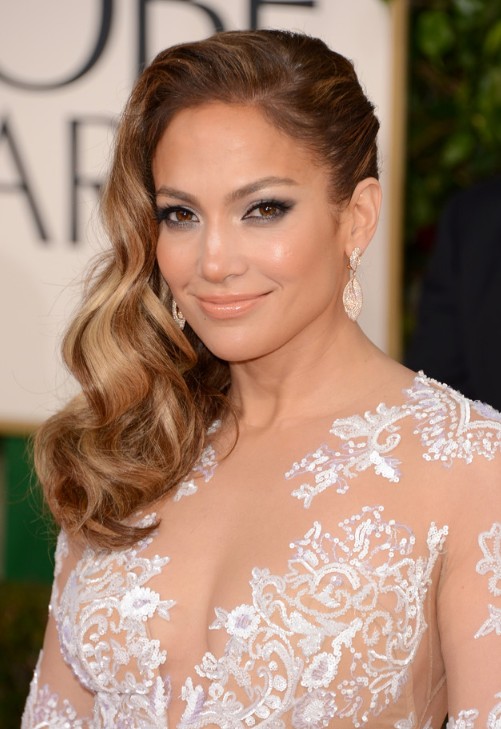 Sexy deep side parted long retro curly hairstyle from Kelly Osbourne. The lovely Kelly Osbourne continued to make a strong case for lilac strands at the 2013 Golden Globes with these strikingly beautiful retro curls.She jumped on the year’s color infatuation with day-glo pink lips. Do you love this style? I love her hair color very much! 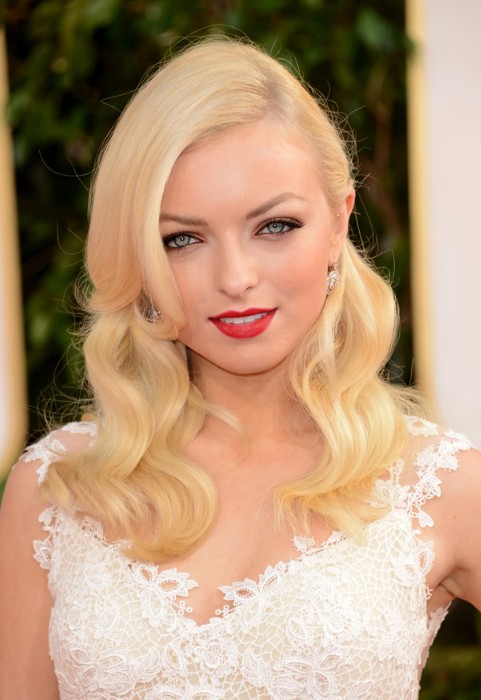 Other Beautiful Hairstyles at the 2013 Golden Globe Awards

Kerry Washington is fearless when it comes to trying new hairstyles or trends—fauxbobs and un-prissy hairbows are a few that come to mind. And last night, she didn’t disappoint with this super-sleek blunt-banged style. 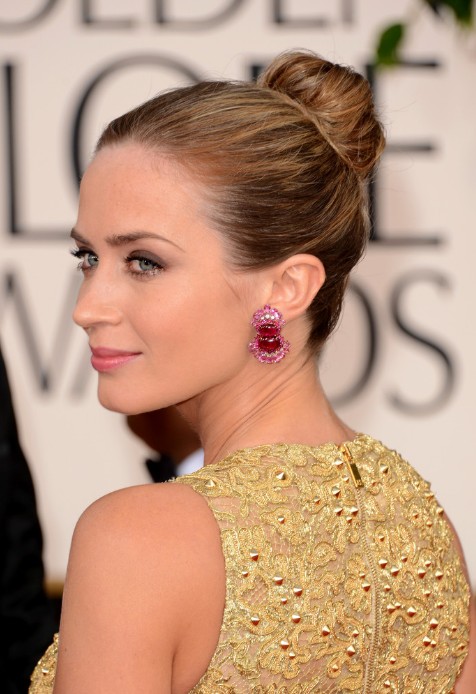 It’s no wonder that a sleek bun is a red carpet fave for celebs—it’s uber-glam, yet clean and classic all at the same time. It also works with jeans and a tee, your favorite LBD or even yoga pants! 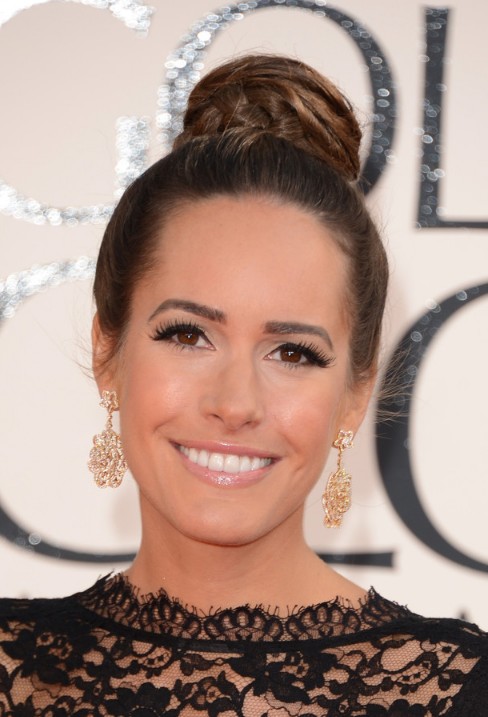 Louise Roe’s prim ballet bun felt anything but stiff with an unexpected plait thrown into the polished style. Sculpted brows, look-at-me-lashes, and baby pink lips contributed to her overall sweetness. 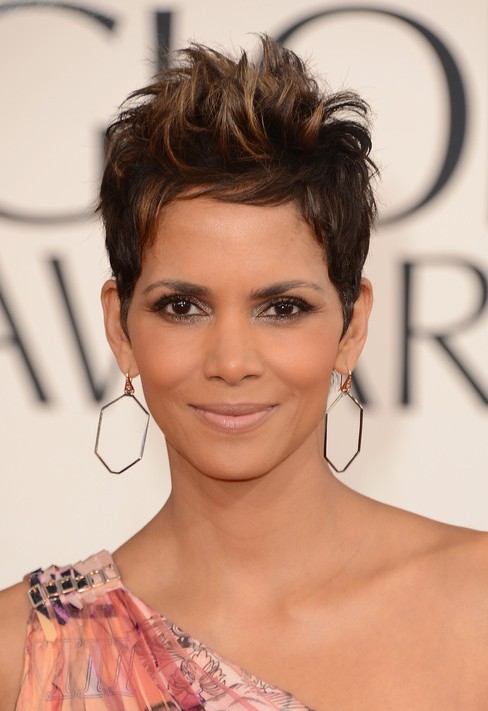 Halle Berry’s layered razor cut is really popular in recent years, and here is a new version of her short hair: sexy messy short spiked pixie cut. Sure, when you hear “Halle Berry wore a short spiked pixie” it sounds super-severe. But in reality, the star’s hair looked light, soft, and feminine. The smoky eyes and creamy beige lips, though, brought the whole thing back to edgy. 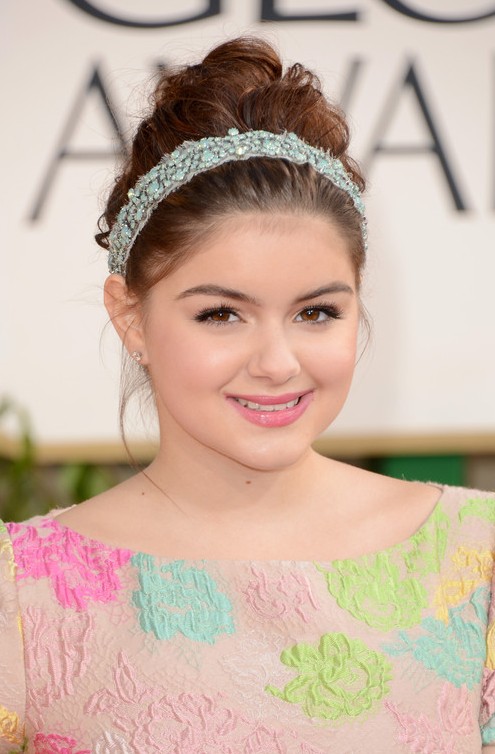 Modern Family’s Ariel Winter accessorized her wind-swept updo with a turquoise-embellished headband, and finished her look off with a sweep of pastel pink gloss—a gorgeous nod to her sweet-enough-to-eat sorbet gown if we’ve ever seen one! 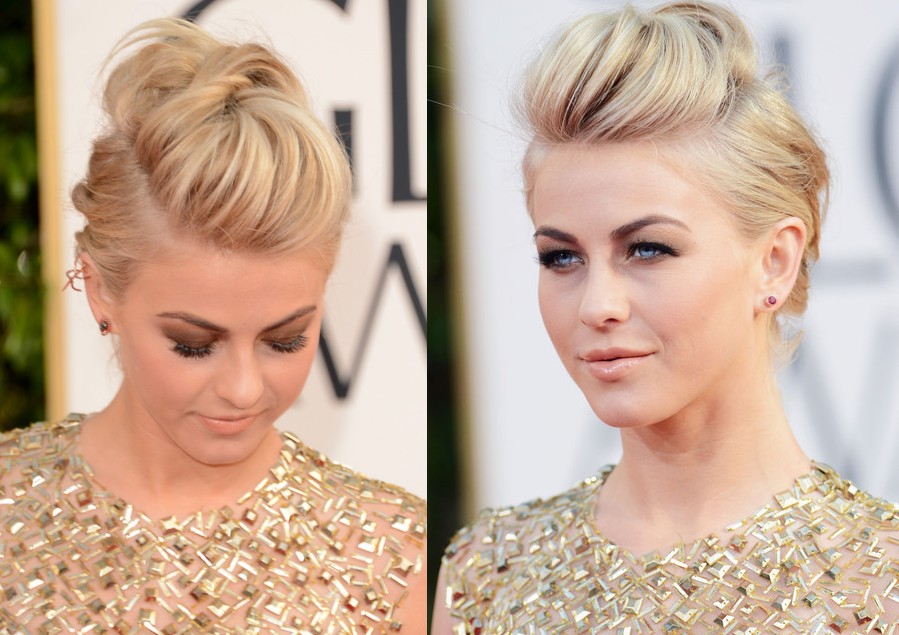 Not to let her boyfriend’s perfectly coiffed locks outshine hers—in case you’ve been under a rock, that would be Ryan Seacrest—Julianne Hough commanded attention with this edgy-but-sweet fauxhawk. High-intensity lashes and barely-there beige lipstick contributed to her overall good-girl-gone-rocker vibe. Would you believe us if we told you the inspiration for Julianne Hough’s edgy Golden Globes ‘do came from Pinterest—it’s true! Whodathunk? I love this hairstyle so much and it’s perfect for wedding, prom, homecoming etc. It’s beautiful! 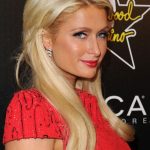 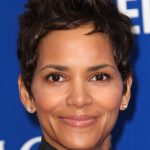 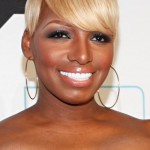